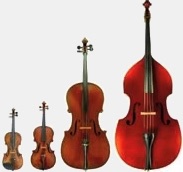 A History in Pictures and Programs - 2

How better for us to show you what we do than to show you past  concert programs and critiques. This is our Musica da Camera scrapbook, .... enjoy as you scroll down. 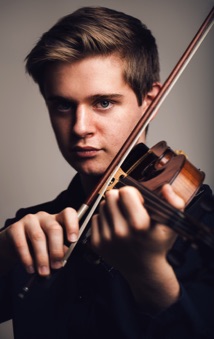 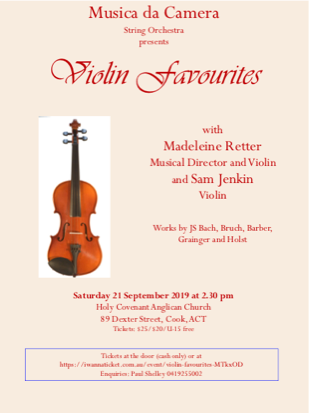 Excerpts from the reviewed  by TONY MAGEE in CityNews.com.au

... MAX Bruch’s “Concerto No. 1, Op. 26 for Violin and Orchestra” presented a challenging opening for Musica da Camera and 16-year-old violin soloist Sam Jenkin, one they pulled off successfully.

Beginning with a tentative orchestral wash, almost as if someone is whispering a secret, Jenkin emerged with a violin cadenza opening of heartfelt passion. There was much to enjoy along the way, particularly strong support from the four cellos and single double bass in an extended orchestral interlude.

... In “Irish Tune from County Derry”, the theme was stated with feeling and grace by the cello and viola sections and later taken over by first and second violins. In “Molly on the Shore”, .... the ensemble displayed fine dynamics with effective pizzicato work from cellos and double bass.

... “St Paul’s Suite” by Gustav Holst revealed enthusiastic and robust playing from the entire chamber orchestra,  ... sweeping solo violin passages, played with confidence and style by leader Madeleine Retter, were infused with the entire first violin section most effectively and with precision.

... Samuel Barber’s most famous piece, “Adagio for Strings" ...  The ensemble managed to capture the increasing dynamics of the piece, ... [It]  finishes on an optimistic major dominant chord of gentleness – something that Musica da Camera clearly felt and played with sensitivity.

...  “Concerto for two violins in D minor” by Sebastian Bach.... Jenkin joined Retter and the two soloists swept the piece along.... A most engaging performance, where Retter and Jenkin played together with confidence, delivering a robust tone and intelligent balance.

...  delighted the audience from start to finish. A credible effort from an enthusiastic group that adores fine music.

Our last concert for 2019 was a program of works directed by Rosemary Macphail, and featuring harpist Rowan Phemister.

There’s something special about a harp in a music concert.  It’s a beautiful looking instrument with the curves of its wooden frame and shining strings.  Even when it’s just one of many instruments being played, its unique sound always soars magically above an orchestra.  Hearing it as the solo instrument in a harp concerto is an opportunity not to be missed.

The Musica Da Camera concert, very well-conducted by Rosemary Macphail, featured two works for the harp with soloist, Rowan Phemister, as well as a Concerto Grosso composed by Piero Castrucci, a work by Jean Sibelius and two other works by Claude Debussy.  The set of known and lesser-known works resulted in a concert of great variety.

Rowan Phemister is a Canberra-based harpist and harp teacher.  He studied the harp with international harpist, Alice Giles, and graduated with a Bachelor of Music from the Sydney Conservatorium of Music.

The concert commenced with Handel’s well-known Harp Concerto No. 6 in B flat major.  Written as part of the oratorio, “Alexander’s Feast”, it’s a compact work in three distinctive movements.  It was very well-played by Rowan Phemister and the orchestra, especially the Larghetto second movement with its wistful melodies.

The harp concerto was followed by the Concerto Grosso Op 3 No 4 by Piero Castrucci who was one of the virtuoso violinists of his time and the leader of Handel’s opera orchestra for over 22 years.  It’s a work of great beauty with passages for solo violin and cello as well as two solo violins.  Orchestra members, John Dobson on violin, Helen Larmour on cello and Gillian Graham, also on violin, gave fine performances of these parts of the work and were well-supported by the rest of the orchestra.

The concert also included the delicately lovely “Girl With The Flaxen Hair” and the ragtime fun of “Golliwog’s Cakewalk” by Claude Debussy.  They were followed by the three movements of “Suite Champêtre” by Finnish composer, Jean Sibelius.  The three movements were eerily atmospheric and given a fine performance by the orchestra.

Rowan Phemister returned to the stage with the harp for the final work in the concert, “Danse Sacrée and Danse Profane” by Claude Debussy.  A very different work compared to the busy Handel piece played earlier in the concert, this slower, colourful and evocative work was skilfully played by Phemister with great feeling, bringing this fine concert to a satisfying close.

Music da Camera is on SPOTIFY and BANDCAMP.

Our Nov 2017 concert recording has been released as a CD, and is available on SPOTIFY. 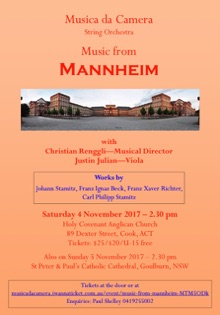 On 27 March, under the direction of Rosemary Macphail, the chamber orchestra featured music making bridges between cultures as diverse as Japan and Poland, Victorian England and the Deep South of the US.  MdC also played a suite by as deeply English as its possible to be by Frank Bridge.

Audience numbers were limited by COVID-19 restrictions to 50 and it was sold out prior ot the performance.

We are awaiting a crit.

Because of COVID19 restrictions, we were forced to close down in March.  Somewhat later we were able to rehearse and give limited concerts to quite small numbers of audience. Thanks to the audience and venue owners who supported us. Apologies to those who wanted to come to listen but missed out because of restrictions.

We are currently putting together some momentos for the record.

"MUSICA da Camera were in string orchestra mode for this concert with a varied program, ably led by guest musical director and violin soloist Dan Russell.

"This ensemble is an unashamedly amateur group, [...] and while non-professional, produce entirely credible performances of interesting music." 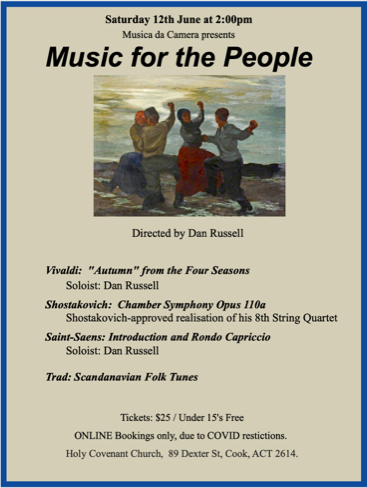